We spoke to North East poet and creator of Door-to-Door Poetry, Rowan McCabe, about poetry, kindness, and Brexit Britain…

What is Door-to-Door Poetry? 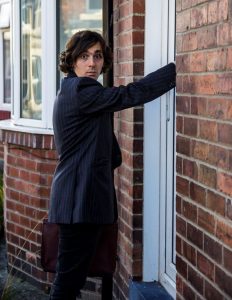 Door-to-Door Poetry is a project where I make a nuisance of myself by knocking on stranger’s doors and writing poems for them, for free, on any subject they like. When they answer I ask if they have a minute to spare; if they say yes, I do a poem which asks them what’s important to them. Then I go away and write a poem about this and bring it back a few weeks later.

What has the project taught you about attitudes in Brexit Britain towards community?

That’s a big one! One thing I’ve noticed is that, in general, people don’t know their neighbours. When it comes to Door-to-Door Poetry, they tend to assume that their neighbours won’t get involved too. I often meet people who take part in the project but say things like: ‘No one round here will be interested in this.’ The truth is quite the opposite. Whether it’s in a council estate, or a wealthy gated community, I’ve learned that people are actually a lot more sociable than you might think.

I think poetry is the perfect medium for the digital age. We’re oversaturated with information and people want art which is instant, engaging

It feels like we’re in the midst of a poetry revival right now… why do you think people are connecting to poetry more now than ever before?

I think poetry is the perfect medium for the digital age. We’re oversaturated with information and people want art which is instant, engaging, but which takes you on a journey too. Whatever social media platform is invented, someone always seems to find a way of getting poetry into it. Which is what I’ve always loved about the art form really, it’s so flexible, you can put it anywhere.

Door-to-Door Poetry states an emphasis on ‘the kindness of strangers’. We are often taught to be wary of people we don’t know, has Door-to-Door changed your own feelings around this?

Yes. I don’t know if I ever would have tried this in the first place if I didn’t have an inkling that people were generally decent. But, when I first started, I wasn’t sure if it was even going to work. Through the course of the project, I’ve met people who’ve done exceptionally kind things for me that I never would have expected, sometimes in places which are perceived to be very dangerous too. It’s really made me reassess my feelings about strangers.

Through the course of the project, I’ve met people who’ve done exceptionally kind things for me 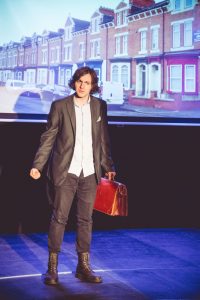 What is it about poetry as an artform that lends itself to this kind of project?

The fact you can do it anywhere. You don’t need anything except a voice, or a pen and paper. It takes a lot less time than something like ‘Door-to-Door Novels’. And ‘Door-to-Door Paintings’ would be cool, but you’d have to carry all the canvases and easels and paintbrushes and everything. No, it just seems easier this way.

What’s been the most challenging aspect of Door-to-Door?

Honestly? It’s how open people can be and finding the right response to that. Occasionally, you hear a story which is tragic. I met a lady called Margaret recently in Boston, Lincolnshire, who asked for a poem about her daughter being murdered. You’re in a very particular position when something like this happens, because your job is to listen and express something back. But you’re also not a councillor either, it’s not your job to get too involved.

But this seems like a sad place to leave this interview on though. Maybe I should have just lied and said “Broken doorbells”? Sometimes I get holes in my shoes…