Owen Craven-Griffiths
Apples and Snakes’ Producer for the Midlands

When it comes to spoken word it can sometimes be hard to define success. For many poets one indicator can be winning a major slam title. This was the case for me. In 2007 I won the UK Slam Championships at Stratford Theatre Royal under my AKA John Berkavitch. My prize included a trophy, a small cash reward, and a title that for the last 12 years has featured in the first couple of lines of my bio.

‘Former UK Slam Champion’ has never really been an indicator of the kind of work I make but has definitely secured me numerous bookings. Slam itself can be a fairly rigid format. There are time constraints, some styles fair better than others and the judging system can be incredibly subjective. The poems I used to win my title had been written with these things in mind. I entered the slam with a strategy and on the day I was lucky. I have never believed that I was the “best” poet on that stage just that I managed to hit the perfect combination of hard work plus opportunity multiplied by luck.

By 2008 the work I was making had moved a long way from slam but I still felt a pressure to live up to that title. I find this balancing act incredibly interesting and decided to ask 10 other high profile Slam winners for their take on it.

Being the National Slam Champion meant that I got a lot of gigs. I think the artist’s relationship with an audience can be quite problematic and that if you spend a lot of time on stage then you come to need it, or you come to appreciate it more than the things that actually matter. So you lose sight of your own authenticity before you even think about writing your own truth; you kind of exist for your audience and that is when authenticity and truth get lost. 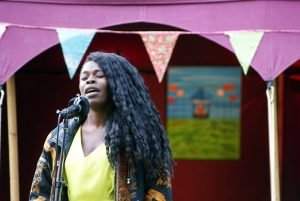 I think by the time I was really hitting that stride with slams and winning, I already had an awareness of the limitations of it as a format. The minute everything’s a little bit too slick, a little bit too chill on stage, you need to just go and start writing in a different form, you need to go up there and do a fresh-ass poem and be, like: ah s***, is this any good? You just need to keep yourself a little bit clenched.

I’m actually at a stage where, you know, you’ve got the performance skills, you’ve got the writing skills, what are you not dealing with? We think as performers we can go and talk about anything, but there’s still stuff that is taboo. I think it’s important that I bring some of that to the stage. I think it is. No matter how uncomfortable it makes people feel, or me. I’ve always come from a personal political standpoint, so I talk about things that have personally affected me. I know as writers we can write about anything but there is a level of authenticity with poetry that I like to feel when I read and see people perform. We’ve all got stories, and important stories, to tell so, like, tell your own stories. Those are the strongest stories you can tell.

This thing about authenticity, I think I’m obviously very public about the fact that my politics is very tied up with my poetry and my performance. I feel that when I’m performing work that it’s very much that these are my beliefs and I stand by them, and I really want that to be true and not just to be because it makes a good poem that wins a slam. And at times that’s been a bit difficult. The only person you should be making work for really, I feel, is yourself and what you’re comfortable doing. So I think, if you can, you need to make a choice about how much you buy into that pressure. 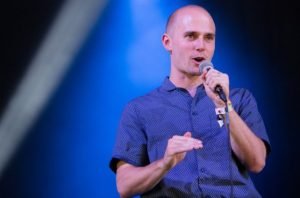 I think after I’d done a lot of slam, and essentially come up through spoken word, my interest shifted a little bit more to the page, and creating stuff that works on the page as well as it does on the stage, and opening the door to that world. And I have felt at times, will people that liked my stuff before like this stuff now and be onboard with it? But I think that’s part of being an artist and part of being a writer – that you’re always changing and your work’s always developing – and I think what’s challenging is when people feel like they have to stay in that thing that they were at the beginning. I feel like I’ve seen that more in America where people make a living from being in slams and, therefore, they don’t have room to grow, or they feel like they always have to write that poem just in a different iteration.

Poetry is so personal. Regardless of whether it is your experience or not, people are going to assume it is when you’re performing it on stage and it’s just you and the microphone. And I think there is more of a question about that now – of is it your story to tell? And who should be telling that story?

I think authenticity looks different to everybody, and I think success looks different for everybody. I had to experience inauthenticity to understand what authenticity was. I think I probably did alter what I was writing, or felt like I needed to maintain the same standard, and then very quickly realised that that was taking me away from what I wanted to write or how I wanted to express myself. I’m not one-hundred-percent convinced that once you’ve got to that level you can stay in slam and remain completely authentic. I think the trick is to just keep pushing yourself out of your comfort zone, whatever your comfort zone is. My comfort zone was ‘three minute slam winning poem’, so I just keep trying to make sure that I’m writing stuff that challenges that or, if it doesn’t, as long as it feels like what I wanna write, that’s fine.

If your internal compass and what you want to get out of your art is the most important thing, then I think, regardless of any kind of outside influences, any success, you still know what you wanna do. For a lot of people it can be hard to keep that focus, especially when you start to get your eyes pulled in a certain direction of what other people are doing and what you think the public might want from you. But again, for me, that was just kind of more confirmation of ‘ok, well you’ve got to a certain level of success by doing you, so why change that now?’

When it comes to artistic voice, I feel like once you’ve got to a level of craft, a level of expertise, and a level of development with your skill and your voice, I think probably the most important thing is for your unique voice to come through. Ultimately, you are the authority on your art, and there’s only one version of you, so make sure what comes out is as true to that as possible.

For me, it always felt very natural to write from a place of experience. So when I started, most stuff was about coming of age, but I think I’ve realised that I’m in a different place now to where I was when I started writing and performing poems. I’ve had to think about where I’m at now and where I’m writing from. So I think, just trying to keep writing new stuff that feels relevant, but also analysing why you’re writing what you’re writing and the place you’re coming from. 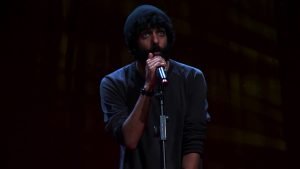 Who defines it? Because if it’s about truth and authenticity, are you defining it? Because if you’re doing a gig and some next person says: oh, this guy’s authentic. Like, how do they know? I guess it all comes down to how you define truth and authenticity for yourself. You’ve just got to remember why you started. Remembering the intension while you’re writing will give you a centre.

I do sometimes find it harder to take risks and risk failing in my writing because it feels like people will doubt my achievements, question whether I deserve to be where I am or start to take me less seriously if I try something new and it doesn’t work. I’d say this has definitely sometimes made it harder for me to write new things. I remind myself of the reasons why I started writing in the first place, for the fun, joy and human connection that I got out of it. I also remind myself that I am most powerful and connected when I’m being vulnerable and honest in my writing, and that this vulnerability does not just apply to the things I write about but also in trying new things and daring to write ‘badly’ sometimes. Also, reminding myself to be open to taking advice and criticism from everywhere.