‘And ever in our hearts doth ring
This song of Spring, Spring!’

‘As a quiet little seedling
Lay within its darksome bed,
To itself it fell a-talking,
And this is what it said.’

There is something about nature and poetry that is interconnected, something felt and experienced whenever we give ourselves time and space to be present in nature. An indescribable sense of peace that can stay with us as Wordsworth says in I Wondered Lonely As A Cloud, about the daffodils he spied….

‘For oft, when on my couch I lie
In vacant or in pensive mood,
They flash upon that inward eye
Which is the bliss of solitude;
And then my heart with pleasure fills,
And dances with the daffodils.’

And this is not just some poetic, arty nonsense; time in nature makes us feel better. One recent study showed that spending 120 minutes in nature a week is associated with good health and well-being. But is this really a surprise? I think it’s fair to say that we all feel better for getting outside, feeling the sun on our skin and breathing in fresh air. Poets tend to be observant and sensitive. It’s part of the job description to observe the world around you and to feel as you observe and to condense those feelings and emotions into a poem. It is easy to see how we have ended up with so many poems that reflect on nature, nature feels intense and overwhelming and begs us to write for her.

I suspect this revival is no longer just because of Nature’s awesomeness, but because of her vulnerability

With the Poet Laureate’s new poetry award for nature poems (The Laurel Prize) it seems that nature poetry is back in vogue and there have been many fabulous new poetry collections celebrating all that is nature, from the wonderful works of Nicola Davies to Robert Macfarlane’s and Jackie Morris’ brilliant The Lost Words. I suspect this revival is no longer just because of Nature’s awesomeness, but because of her vulnerability. Climate change has gone from being something we can avoid to a threat we must try to minimise, we have depleted the seas and filled them with plastic, we continue to burn fossil fuels and just in the UK alone our most important wildlife species have plummeted by 60% since the 1970’s! (nbn.org.uk) Nature is in peril and maybe poetry is a way of inspiring change. 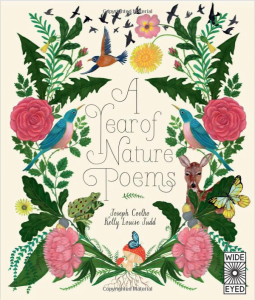 My poetry collection A Year Of Nature Poems (illustrated by Kelly Louise Judd) follows on the poetic tradition of nature writing with one poem inspired by the natural world for each month of the year. I wanted to readdress humanity’s apparent separation and disregard for nature by focusing the poems on moments of human interaction with the natural world, such as sitting outside during the April showers, watching mayflies rise from a garden-dug pond and playing in autumn’s dry leaves. My hope was that in centring these poems around the human in nature my readers would reflect on their own experiences in the natural world. Unfortunately it became impossible to just revel in the magnificence of nature in these poems (as poets had the freedom to do in times gone by) as so many of the topics I wanted to write about are directly affected by climate change, from amphibian decline to changes in jet streams affecting our local climate. To that end each poem has a brief introduction highlighting some of the larger issues at play allowing, I hope, for further reflection and action.

I’ve been so awed and impressed with the active role young people are taking in highlighting their concerns regarding the planet they are set to inherit. They have brought the issues of climate change and the natural world booming ever louder onto our TV’s and radios and social media feeds and outside our local schools. There is clearly a long way to go to change government policies to make long lasting significant change but as we strive forward I know that poetry is going to be a big part of this journey. How else can we truly communicate what is under threat, how else can we truly grieve what we have lost?

Joseph Coelho’s Poetry Collection A Year Of Nature Poems, Illustrated by Kelly Louise Judd, is now available in Paperback and published by Wide eyed Books. Find out more about Joseph’s work at www.thepoetryofjosephcoelho.com