Who am I? I am a poet who writes about things that matter to me, so I like to write about culture and identity. I am a North East poet and a British Bangladeshi. I am a new mum and a young mum. I like to tell stories through my writing and the workshops that I facilitate and deliver use poetry as a form of expression; whether that’s expressing your identity, or expressing a story, or a feeling, or an experience.

My poetry journey began when I was growing up in South Shields; back then poetry wasn’t really a “thing”. My sister and I were always watching poets online and figured all the cool people were in London or down south somewhere. We wanted to get involved in this world and so we decided to put our own money together to host an event and invited all these poets to come up.

At this time, we didn’t know much about funding or how to apply for those kinds of things, so we just did it ourselves. It turned out to be a really really good event, it went down well with our audience and I ended up really inspired. Eventually, I plucked up the courage to record something that I had written and share it on social media, I think it was Facebook. At that time in my life, the response that I got was just what I needed – it was so good. Listening back to the piece now I cringe, but at the time I was overwhelmed by the support and started to feel like I could work on my craft. It was around then that I was writing more and telling more people about my poetry.

I was originally quite hesitant to tell my family about my work, I’m South Asian and sometimes it feels like if you’re not a doctor or a lawyer, it’s not good enough.

However, when I did start talking to them about it more, I realised there was no need to be scared as they were so supportive – I even found out that I come from a long lineage of poets! For me, that cemented that this is what I am meant to do, I am meant to be a poet.

Life threw me a curveball when I found out I was pregnant with my daughter, my direction changed and my plans refocused. During my pregnancy, I was quite poorly and then when she was born I literally felt like a walking, talking, breastfeeding machine. I felt like I had completely lost myself. I was then just a mum, I wasn’t anything else or anyone else and that was really, really difficult. I had therapy to get me help me get back to where I wanted to be emotionally and mentally, and then I realised that the only thing that helped me stay connected to who I was was my writing. I wasn’t performing or facilitating like I usually do but I was still writing here and there. When I felt like I couldn’t talk to anyone about things, I would write it down and almost talk to myself in my writing and it became an outlet to express myself or however I was feeling. Some of the writing I’ve never looked back on but I was able to just get my feelings out.

When I was going through this I was never physically alone, I had so many people around me. I had my family – I come from a huge family – and my husband and all of my in-laws. I definitely wasn’t alone but I was alone in my own mind.

It felt like even though everybody was so supportive, nobody could really help me get back to being myself and poetry helped me to reconnect with who I am.

The thing is with writing, you can pick up a pen and just do it regardless of what else you have to do most of the time, and that versatility helped me to connect with it and stick with it. I eventually had to accept that I wasn’t going to be the old me again, I had to accept and love the new me who I was becoming.

My daughter is a part of me now and having her and being with her has influenced my writing. I actually began writing to her before she was born, I wrote her a piece called Dear Darling. When I was pregnant, we didn’t find out if I was having a boy or a girl but I just felt so strongly I was carrying a little girl which is why I wrote that poem. I was anxious about bringing a human into the world as I know how cruel this world can be. As a minority, as a woman – I’ve faced my fair share of difficulties in the world and I was nervous and wondering how I would look after us both. So I wrote to her, I write to my little Safaa.

When I write now I always think about what kind of message I want to portray, not just to my daughter, but also to other children and young people growing up. Before becoming a mother, I didn’t really feel the need to think about that, it was more just about what I wanted to write; but now I know my daughter will grow up and look back at her Mum’s writing – what message do I want to give her? When you become a parent you become a role model, and that is always in the back of my mind. 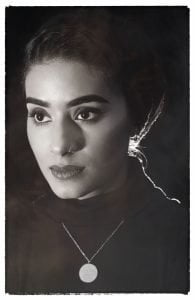 Tahmina is a British Bangladeshi, Newcastle based spoken word poet, creative freelancer and young mother. Poetry has been a significant tool in Tahmina’s life, it gave her a voice at a time where she felt voiceless. Now through her workshops Tahmina aims to pass on those very tools to others.

Tahmina has performed at various events, poetry nights across the country and selected for the prestigious BBC Words First programme. Also presented her poetry radio show on Fast FM for two years running, hosts her own Open Mic poetry night called Strictly Spoken and has been awarded the ‘ABC Arts and Culture Award’ for 2018 and 2019. Tahmina uses her poetry as a means to encourage positive change, her writing is generally influenced by identity, culture, social events and life as a young mother.