​​The first poem I ever performed in public was in the basement of a Starbucks. It was something sweet, innocent and poorly written about holding hands (we don’t all burst onto the scene masters of the Craft). As I compared notes with the other budding performers afterwards however, I slowly realised that my earnest poem had been misinterpreted as a piece about being fingered. I learnt two things that night: 1) always double check your work with a dirty-minded friend, and 2) making people laugh is fun.

People are afraid, admiring and dismissive of it all at once. I have seen, time and time again, equally talented new poets — one serious, one comic — given unequal opportunities as they try to break into the scene. I’ve seen the best poet fail to win slams (this, of course, happens all the time as we know but still…) because their fantastic poem was humorous whereas their opponent’s was about cancer (hard to beat, really). I’ve also watched some of the best poets I know praise comedic artists but then fail to suggest any funny poets when asked to share their favourite writers.

This is not to say that comic poetry and poets aren’t celebrated. In fact, many of the best spoken word artists today are effortless in their ability to jump from seriousness to laughter, often in the same poem. People at the top aren’t the issue though — in emerging and established artists, humour and comedy in poetry seem to have an uneasy relationship. Funny is useful to whip out occasionally as something different, but all too often seen as simpler, easier writing. This sort of makes sense at first.

How can an artful metaphor about nurturing and childhood compare to a surreal setup about the sex life of a Dr Marten?

But dwelling on that thought, and after many failed attempts to write even a half-funny joke, it turns out comic poetry might actually be more skilled than imagined. (In answer to your question – squeaky, and with a surprising lack of shoe polish).

Historically, this undervaluing of comedy in poetry doesn’t make any sense. How many of us were introduced to verse through funny poems for kids? (I was put off lying for life, honest…) And truth be told more people probably know a rude limerick off-by-heart than any noble and serious pieces.

There is some room for hope. Humour isn’t always left out entirely as comedy is usually, at a minimum, acknowledged by even the most stoic of poets — not in their writing, but in the in-between bits during performances. A well-placed joke lightens the tension of a tricky piece and provides much needed contrast to hold an audience. Half an hour of serious poetry without even a glimpse of a wry smile is a lot to endure, and most acknowledge this through their chatter. Only half a step more and people might put some of it in their poems too.

It’s tricky to dissect why this might be. I know that for some people it’s to do with risk-taking.

When you start as a writer you probably only do one type of poetry well, so broadening your work to include comedy is terrifying, particularly when humour feels much more binary; either it’s funny or it’s not.

Admittedly, there’s some truth in the idea. If a serious image in your poem is weak and needs improving, you’ll generally find that out later when talking to a friend; if your joke is bad, it is apparent right there on stage, as the room stays stubbornly silent and your joke flops weakly to the ground. However it is a strange irony that poets, whose work is frequently associated with vulnerability, find performing comedy makes them feel more vulnerable than those gut-wrenching truths we have come to associate with spoken word.

It might also be something else. We learn to see things we laugh at as safe, harmless. I know this only too well and used it to my advantage growing up. If you can get people to laugh at your queerness, or otherness, you can survive. The laughter I induced by referencing my identity neutralised any of the many threats I posed (like converting anyone who came within five feet of me into a homo). When it comes to writing, however, we want our poems to be powerful and laced with meaning. We want them to move and challenge and surprise an audience. If they’re too busy laughing at something flippant I threw in about jizz, then how can they remember to be moved by the brilliant line before about unrelenting grief?

Of course, it doesn’t really work like this. I find the most powerful poems are the ones that play with a message and bring humour in as a tool to lighten something dark, or even draw awareness to the truth that quite often awful things are really quite funny. There is a dreadful sense of comedy that can come from death or sexual assault or homophobia or any number of things that shouldn’t be funny, but then that’s what it is to be this contrary, complex, sack of chemistry and to laugh when we shouldn’t.

It’s also a case of where and who. Sometimes, comedy is one of the strongest things you can do to get some types of audiences on your side, but this is very place and people dependent: A room of slightly tipsy students — great! A room of raucous middle-aged people — even better! A room of very serious poets… not ideal. That’s certainly something I’ve noticed: People, real people (you know, the type that make up audiences) seem to love funny poetry. Sometimes it is the poets — the gatekeepers who book and judge competitions — who might bring with them a lot more baggage about what a poem should be, and not, say, whether they enjoy it, that might be the problem.

And it’s a lot to miss out on — humour brings so many gifts with it. An absurd poem allows an idea to be dissected in a thousand unlikely ways. Often, the ability to break into the improbable, and suspend your reality, can be both disarming and freeing. In fact, one of my favourite things about comedy is that a joke can trick you into laughing at something you feel uncomfortable with, and therefore make you more comfortable with it. Conversely it can also surprise you with an instinctive laugh, and then make you feel uncomfortable for finding it funny. Most of all, humour can remind you that you are human. For me, at least, that’s one thing that poetry tries so hard to do — to try and reveal what it is to be human — and how can poetry do that properly with this crucial half of itself stifled and ignored?

What can we do to be kinder to comedy? Well, for a start, the same bit of advice that we all learn when we begin writing: listen. Give humour a chance. Don’t just laugh and then move on. Relax into the joke, marvel at the ingenuity of its construction, and reward those who tried something new and clever and brilliant. After that, maybe, sneak a few jokes into your own writing. Until it is impossible to go through any poetry night without some belly laughs. Until more funny poems win those haughty spoken word prizes. Until people recommend funny poets without any caveats (“their stuff is a bit silly though”). It won’t ruin poetry, I promise — only finger-clicking does that — it’ll just make that ineffable thing we try and poke into being with our words, all the more great and sweet and brilliant. 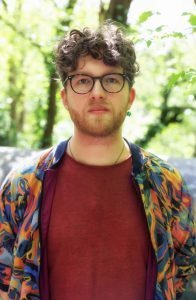 Tom lives in Bristol with an obscene number of books. Detailing the queer experience alongside tales of friends and strangers, Tom’s poems toy with myth, devilish humour, and absurdity to portray the bizarre and brilliant in the everyday. Outside of writing Tom has a PhD on roots and soil erosion and works in climate change science.

Lastest book: …And Then She Ate Him

“The scope and depth in this collection is astounding… magical in all senses of the word.” – Keith Jarrett

In his debut collection, Tom Denbigh’s wickedly beautiful writing holds up a distorted mirror to the world. Deftly weaving the queer experience alongside tales of friends and strangers, Tom toys with myth, devilish humour and absurdity to portray the bizarre and brilliant in the mundane. Imagination is brought to life in this unique collection that is thought-provoking, insightful and startlingly joyous.