Young Identity started life as Inna Voice. In 2006, we entered Apples and Snakes’ national poetry slam “Word Cup” at Warwickshire University. It was extremely exciting and we had no idea that we would end up with a project that has now become a micro charity.

After Word Cup, we started running weekly workshops in Mosside Home Centre – which is part of Manchester City Council Library. Apples and Snakes gave us some seed money that helped us get special guests for these workshops. The money also helped to pay for one of the facilitators who at the time was a young writer, hip-hop artist and co-founder of Inna Voice. That facilitator’s name was Ali Gadema.

There were weekly workshops for the local community, in particular black and brown writers who were underrepresented in the literature sector – particularly in Manchester.

We adopted the name Young Identity because of this group. Really, the etymology of the group was Inna Voice who then became ‘Young Identity’. We tried to find the créme de la créme within the local writing community.

We committed to weekly workshops for many years and eventually became known as the group that people would strive to get into. Through our partnership with Apples and Snakes, we continued to offer workshops, facilitations and performance opportunities with many other different city organisations. It soon became apparent that we had something good going on here – a platform for young people to use their voice to articulate identity issues both local and globally.

Over the years we have had many different voices within the projects, lots who have gone on to become recognised voices within the cultural sector. In 2018, with the support of a new board of trustees and a young people’s steering group, we created a new company called Wordsmith Awards. People like Nicole May, Reece Williams and Chris Nelson – who were a part of the small micro charity start- up – started piloting this small project. This project saw us working within schools, doing slam poetry competitions and other projects such as Shake The Dust and Shot From The Lip.

A Shining Moment for Young Identity

It is extremely difficult to pinpoint a particular cohort of young people or events I am most proud of. If I had to pick one achievement to represent Young Identity’s legacy, it would be Alphabus. This was a co-collaborative piece of work with International dance group The Dream Ring with Reggie Regg Roc Gray and his excitable, flexing dances. It was a piece of work commissioned by Manchester International Festival that brought performance poets together with a new form of street dance called FlexN.

The piece was about the underlying issues that communal living can create. Focusing on a father who had formed a community and had lied about the world as he tried to make a utopian existence for his people.
It actually made me realise that poetry and performance today has huge possibilities. With the right budget and collaborations, we could take poetry and spoken word out of the marginalised niche programming, and open it up to a wider audience. This becomes even more enlightening when using mixed genres to create a wonderful narrative.

The advice I would give to someone starting their own organisation is that you have to have a real passion and dedication to what it is that you’re trying to create. I think you also have to realise that there will be times when that organisation can seem more important than anything else in your life. Therefore, to get the work life balance right, you really need to think about your business structure and plan.

It is important to surround yourself with people who have the same vision as you. Surround yourself with advocates for the work that you are trying to achieve. It is important to know that understanding your company’s philosophy, vision and aims are vital. What is your unique selling point and why would people support the work that you’re doing or your business? Have the right research ready around the start-up business or organisation from the beginning.

No matter what, there will be pitfalls. However I think that that’s where we best learn to dust ourselves off, pick ourselves up and continue. I will go back to the old adage that ‘Rome was not built in a day’ because who can build a city in a day? No one. So remember that although there will be challenges,  if you stick to your plans then you can create something quite marvellous.

The hardest thing about running a grassroots organisation like ours is it’s always challenging to find the money required to support the infrastructure and growth of an organisation that is about supporting the community.

What I will say is that if you love what you do, then you will find a way forward. The biggest challenge is remaining relevant, fresh, and having something that people want to participate in.

The future of Young Identity

We would like to remain true to our vision, offering young and marginalised communities the opportunity to speak up and out through literature, poetry and performance. We will remain a collaborative organisation working with other art forms to stretch and push the boundaries of what spoken word can do.

We want to continue to grow the organisation to remain innovative and remain a frontline contender for good works and practice within Manchester (both locally nationally and internationally). We want to find new ways to deliver our works and grow into an organisation in a way that any Chief Executive could take over and continue the good works of Young Identity.

Ultimately, we want to create a real legacy for the young writers in Manchester. Showcase the voices who have come through the organisation into real progressional pathways within the cultural and heritage sector of the city. Young people that could lead Young Identity or even become leaders in the city.

Ideally what we’d like to do is to create a shared community space whereby good practices, goals and visions can be distributed. This would mean similar organisations and like minded groups could tap into proven and good ways of working.

I don’t have all the answers but the one thing I do know is that I have a love for poetry and the performance arts in general. I think it’s really important that they’re part of everyone’s life as I firmly believe that they add meaning. 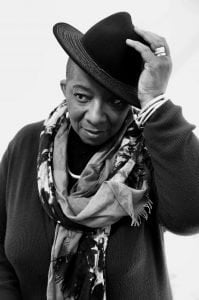 Shirley May is part of the Speakeasy Collective in Manchester who writes from the perspective of a member of the Caribbean diaspora and references being part of the Black British Canon. Her aim is to make both performance and page poetry accessible to young people in Manchester; she has worked for 25 years mentoring and supporting new writers in schools and community groups. Her team of young mentors and writers – ‘Young Identity’ – believe that young people’s voices are as valid as adults within writing.

Shirley has performed predominantly in the North West but also nationally and internationally. She has appeared at the Nuyorican Poets Cafe in New York and the Calabash writing festival in Jamaica. She was a member of Commonword’s writing development agency and is a Visiting Fellow at Manchester Metropolitan University. Shirley May has been published in several anthologies, including ‘The Suitcase Book of Love Poems’, ‘Hair’, ‘The Food for Thought Anthology’ as well as ‘Evidently Anthology’ (Volume 1 and Volume  2).

Back to Behind The Words