Its September. School bells are calling in students to begin a new academic year, and for many writer teachers like me, we’re trying to find the balance and earning a living and honouring their creative endeavours.

I’m a part-time English lecturer working in Further Education (FE), teaching GCSE English Language resits to learners who didn’t get the grades they hoped for the first (second or third) time around. I didn’t plan on being a teacher. Although this role does scratch the giving-back-to-my-community itch, I do intend on it remaining part-time. It offers a touch of security after straddling the poverty line my whole life, but my writing time is as necessary as a heartbeat.

My first experience as an educator came when I graduated from a TV Production Degree 2005, living (barley living!) in London. Struggling to find paid employment within the industry (a whole other blog post), I was becoming quite good at forging paper travel cards, changing any dates with 5s into an 8s to stretch their use. Stealing toilet roll from my part-time job at the cinema was a regular, and eviction notices began to pile up.

I accepted an offer to provide summer holiday and after-school media workshops in the Unity centre in Stonebridge to help motivate and inspire young people to see their full potential. We made music videos, comics and posters on topics that impacted their lives. It was there that I realised how important it was for these youths to have a young black woman from a similar socio-economic background leading these workshops.

Fast forward to 2012, as member of Nottingham based poetry collective Mouthy Poets, I transferred my experience of devising media workshops to facilitating Mouthy Youngers and various spoken word workshops. Until one day, a bold deputy-head saw me perform and insisted that his school and English department needed me to help make Literacy/English accessible and interesting.

I told him that I had no teaching qualifications, that I was dyslexic and that I was never going to wear a two-piece suit on a daily basis. He said, ‘perfect’ colluded with Mouthy Poets founder Deborah Stevenson and made me a fictitious role, Spoken Word Educator.

For the academic year 2013-14, I was churning out four spoken word workshops per day, four days per week. Every English class of every year group in the school saw me at least twice per term. I facilitated an after-school creative writing group, a poetry film group with the alternative provision students, and I had weekly sessions with the SEN, EaAL classes. In addition, with help from other members of Mouthy Poets, we organised an in-school week-long poetry festival culminating in an end-of-year showcase where students could perform, screen, or exhibit their writing to parents, family members, and careers. I was exhausted, but my heart was full, I wept for a whole day.

I occasionally see ex-students from this school whilst going about my everyday life. They stop and call out ‘poetry lady, remember me?’.

Only last month, a young, broad shouldered, baritone-voiced man approached me in Wilko’s and demanded that I came to meet his son and girlfriend who were at the bus stop outside. The young dad, now 23, remembers the time he was 15 with detention, when I snuck him into an after-school poetry group where we spoke about hip-hop, gardening, and the importance of being different. He remembered how he came for a couple of sessions without being ‘in detention’ and wrote poems. He said ‘Miss, you were one teacher that made me think I could do something’.

He hasn’t pursued a career in literature, but it was never about that. It was about empowerment, giving young people a sense of value, and the communication skills to help navigate the challenging, joyous, and awkward moments life presents us. He’s actually working as a waste disposal person because he was determined that his boy would not end up in care without knowing his dad like he had. That he would not follow his friends into crime.

He wanted me to know that he remembered our discussion about daring to be different and that he reads stories to his son so that one day he’ll like words and books. I watched this young man get on the bus with his family, returned to Wilko’s and bought pocket sized tissues to dry my face.

Following on from my Spoken Word Educator role, I continued to facilitate creative writing workshops across the East Midlands. I worked in an Italian summer school teaching English combining it with drama and arts and crafts to soften the blow for students and for me. I also worked for organisations such as Writing East Midlands, First Story and the National Literary Trust.

After a series threats of being summoned to court for unpaid council tax, I signed up to a teaching agency for supply work. I’d sneak in the odd performance poetry exercise when the promised lesson plan was missing or too dry. I gained a permanent part-time job as a teaching assistant at a further education college within the construction department, helping mainly boys from deprived backgrounds complete their course- I was so far removed from poetry but saw poems in everything.

blood surges to his face
beetroot and boiling

his jugular enraged
pythons his throat

he steps closer
until his coffee breath

can be tasted
on Jamal’s tongue.

Jamal is 15
out of class

in the corridor
one minute after the bell

and Mr. Cockren is teaching
him how to communicate

I longed to develop my own writing. Writing was a thing I did in the gaps between earning money to pay bills and I felt like a fraud- advising workshop attendees to develop regular writing time and not doing it myself. So, I enrolled in an MA in Creative Writing and Education at Goldsmiths and commuted down one to London day a week. I had legitimate time to write, deadlines to ensure I completed and some credibility as an educator. Often, qualified teachers would side-eye me in the staffroom with a ‘but what does she know about teaching?’ look. They may have tried to be very subtle and quiet, but I saw them.

Students from all backgrounds would turn to me; Black, working class, neurodivergent, brightly clothed, wide mouth, broke pocket, Jamaican patois bending tongue- Ioney for help. I realised this is what education needs. Diverse classrooms need diverse teachers; not just for the Non-White students, I believe all students benefit from knowing that a broke-pocket Black women can ‘run tings’ in the class.

Even though the MA I completed at Goldsmiths induced panic attacks and unearthed past educational trauma, I went on and applied for a PGCE in Post Compulsory Education at Nottingham Trent University. Before I even started I was offered a job as a part-time English teacher at the college where I was a TA.

Being a part-time English teacher in further education means that for three days I work to live. It means for the first time in my life I’ve been able to cover all my bills, to buy a selection of food, cleaning products, and buy non-essentials like Fab ice lollies. The rest of my week I dedicate to my writing projects (when not caring for sick parents). I try to focus on one or two tasks each week.

I’m aware that my writing has been pushed to the margins whilst studying and carving out an educator career and can often feel ‘behind’, but I haven’t quit. I’ve had to make a concerted effort to sign up for workshops, to enter competitions, to apply for opportunities and keep my writing life ablaze, it’s exhausting, but essential.

I currently have a residency (July -September) at New Art Exchange where I’m researching and developing new writing culminating in a sharing in November. I also have a short story about to be published in Glimpse and an anthology of Black British Speculative fiction, published by Peepal Tree Press in September 2022. I’m still working toward my first collection of poetry.

I haven’t had a holiday. I probably won’t get one this year. I’ve been working straight from the academic year into artist mode over the summer returning to teaching in September, this is the reality. Down time and rest are the next things I need to factor into my life, advice welcome…

8 ways to keep writing whilst being a busy teacher/educator 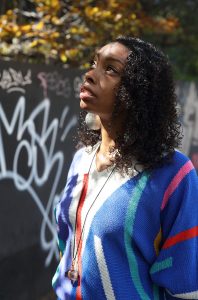 Ioney, performance poet, writer, educator, a Hyson Green, Nottingham native. Her artistic practice is ignited by her Jamaican heritage, fuelled by the Black British experience, and smoulders with womaness.

As a Spoken Word Educator she works across the East Midlands encouraging people to harness the power of poetry to realise their own greatness. Co-lead facilitator for Gobs Poetry collective in Nottingham.

For 2022, Ioney was the New Art exchange, resident artist July-September, where she was developing her project, Jamaica and Her Daughters a collection of poetry and prose. Her short story, First Flight, will appear in the first Black British speculative fiction anthology, Glimpse, published by Peepal Tree Press.

This blog post is part of Behind The Words. Photo credit: Colin Potsig.