“i hate having to share trauma with white people to be taken seriously. as a writer but also just as a person. like, is that the only way whiteness recognises me as a person? through pain?” – Chen Chen

The very first spoken word poem I ever wrote was on my experience of a lifetime of receiving racism and silent bystanders. It remains the only poem I’ve written on racism and I don’t think I can ever do another.

I performed it for about a year at different open mic events until I had to stop. It was liberating to write and perform the piece at first, but it quickly became deeply draining and very questionable as to who was now benefiting from this piece. The poem required me to pull rage and awful memories from behind the mental wall (which was blocking them out for self-preservation reasons) and serve them as entertainment for audiences.

After doing a poetry slam, I retired the piece as I realised having my trauma consumed and scored by non-East and South-East Asian (ESEA) people is actually quite horrific.

Since then, I’ve been performing at open mic nights before becoming a featured act at events, working with major organisations as an artist and so on. I’ve written about plants, space, quantum theory, love and other stories. In the meantime, I kept a lookout for other ESEA poets, hoping it wasn’t just me out here. In my first four years of poetry, I managed to find about three others.

It’s as though we don’t exist.

In 2020, COVID-19 related racism against ESEA people soared across the world. Reported hate crime tripled in the UK in the first three months and online hate speech shot up by 900%.

However media outlets denied doing this and responded to activists with “’Your statement about using solely East and South East Asians in articles relating to COVID-19 in The Guardian is, frankly, wrong.”

Across the world, ESEA people were being assaulted or murdered.
And suddenly, poets like me were visible.

Corporations approached asking us to write about racism or traumas and issues we face. Corporations hover around minority groups like vultures. They’ll want stories or spoken word pieces for their ads, campaigns, shows etc but provide little to no support or pay.

ESEA people are held as the model minority – hardworking, quiet and servile. Corporations expect you to behave as such. They imagine you’ll tell the full depth of your experiences to fit their brief exactly. They won’t pay you much, if anything. You will just be so happy for the opportunity, for the publicity and for having your voices heard on such a big platform.

They will arrange for the poem to be performed for audiences that do not look like you. To retell is to relive and so, with spotlights in your eyes on a stage, you will relive your trauma and make your fellow community relive theirs when they see it. The corporation and their intended audience will hear your stories – it will be shocking, heart wrenching, they’ll say “I can’t believe that happened to you”! It will be cathartic for them, they get to quietly pat themselves on the back for having never done something like that to people like you.

And they get to walk away. There will be no well-being systems set up for you, no support, no check in. If you’re lucky there will be a thank you email. We are expected to put our experiences back in a box until we can mine it again for another piece of work.

We are fed into systems that Other us and fails to see us as people. We are expected to serve our trauma as entertainment. We don’t exist most of the time, and when we do we can only speak on racism, as though we come into being to be attacked or farmed for our stories.

They want to hear stories about racism and how hard it is without doing anything to change their own systems.

We are placed as either writing about race or deliberately choosing not to. We’re pressured to monetise our trauma, as though this is our only value and the only thing we can be the expert on.

This is why community (that’s intersectional with cross-community allyship at the centre) is so important. When we’re together, we make a safe place to be an individual without being picked out to represent an entire race. We’re stronger together, able to back each other up, share knowledge and we make it harder for corporations to exploit or undercut anyone.

I’ve founded BESEA Poets, a collective for British-based ESEA poets, and we currently stand at 25 members across the country. BESEA poets have always been here and been extremely good at our craft, but are rarely platformed.

We’ll write about what we want, when we want. We’ll only write about trauma if it helps us, and if we actually want to. We’re made up of multifaceted and layered individuals who don’t represent an entire race or ethnicity. If companies want to work with us, they’ll need to trust us and not infantilise us by demanding we tell our stories in a certain way.

We have always existed here, and we will continue to do so. 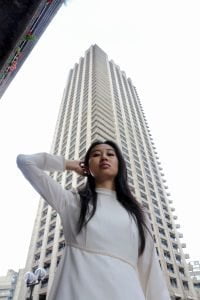 “I work across many different art forms, specialising in poetry, acting and performance, and workshop facilitation.

I’ve made poetry films, spoken word tracks and theatre shows with organisations such as the BBC, Sky Arts, and the Barbican. I founded BESEA Poets, a platform for British based East and South-East Asian poets.

Currently, I’m working on my debut poetry pamphlet. I was once rejected from having a poem baked onto 200 loaves of bread.

Back to Behind the Words Project Page.