A spectacular dragon hatched in Plymouth City Centre on 14 August 2021, growing to the size of a double-decker bus.

The Hatchling is a ground-breaking outdoor theatrical performance that unfolded over a weekend of events and reached an extraordinary finale over the coast of Plymouth, on 14 and 15 August 2021.

The beautiful visitor hatched in the city, building herself a nest and then took to the skies in a bid for her freedom.

Along the way, she explored the city, and as she roamed, she encountered a series of events from intimate interactions to city-wide performances, prepared especially for her majestic visit. 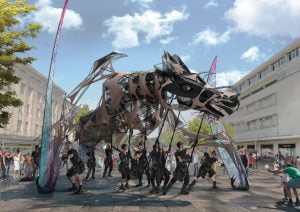 Apples and Snakes commissioned three poets – Rebecca Tantony, Chris White and Shagufta K Iqbal, to create pieces based around dragon mythology, which will be performed during the event.

At the end of her journey, the Hatchling underwent an incredible metamorphosis, unfurling her wings, and soared over the sea at sunset! With a wingspan of over 20 metres, our hatchling is the world’s largest human-operated puppet to attempt flight.

The Hatchling brought together artists, community groups and city partners to create a public artwork of ground-breaking ambition – a cultural icon that will unite people from all walks of life. She will return again for the Jubilee in 2022…

Listen to the Poems

The Hatchling is produced by Trigger – an organisation creating and producing surprising live and digital events that interrupt daily life, reimagine and revive public spaces, and put audiences at the centre of the action. Trigger’s programme aims to create accessible, inclusive and boundary pushing work which is often sited outdoors and/or digital.