Rue Gumbochuma and Irina Richards are Artists in Residence at Downham Library.

Rue Gumbochuma is a Zimbabwe born – Berkshire raised writer who would describe herself as a storyteller. Currently based in London, she has found a balance between poetry and music, using these mediums to explore the human condition.She has produced work for several organisations and performed at renowned venues such as The Roundhouse and BAFTA. Most recently, her works has been published in a 2018 Anthology titled ‘SISTA!’ written by queer women of African/Caribbean descent. 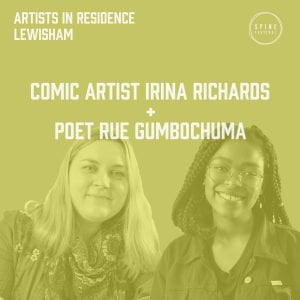